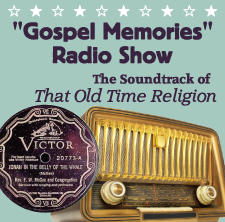 Gospel Memories is a weekly radio program that showcases the history of African American gospel, spiritual, and jubilee music. Catch Gospel Memories every Sunday 10 pm to 10:30 pm with an encore edition of the program airing from 10:30 to 11:00 pm on KPFT 90.1 FM.

Bob Marovich, gospel music historian, author, and Grammy-nominated album notes writer, is producer and host. He developed the program, which first aired live on Chicago’s WLUW 88.7 FM on May 6, 2001, and the first Sunday of each month thereafter, from 3:00 – 7:30 a.m. Since 2006, Gospel Memories has been a weekly one-hour live broadcast that airs Saturdays from 10:00 to 11:00 a.m.

Each week, Marovich draws from a collection of more than 20,000 individual recordings to provide listeners with a variety of classic groups, quartets, choirs, soloists, and instrumentalists—from the first known commercial recording of black sacred music (1895) to the 1980s. Gospel Memories is one of only a few, and perhaps the only, radio show in the United States to showcase such a diversity of gospel styles that span more than a century.

Marovich has interviewed dozens of artists on the program, including Isaac “Dickie” Freeman (Fairfield Four), Margaret Allison (Angelic Gospel Singers), the Barrett Sisters, Etta James (on her gospel roots), and Shirley Caesar (a full list can be found on the show’s website, www.gospelmemories.com). He has interviewed authors of books on gospel music and when artists pass away, he salutes them with a long set, and sometimes an entire show, of their music.

Periodically, Gospel Memories focuses on specific themes, such as music from Chicago’s historic African American Churches, sacred steel, keyboard wizards, and guitar evangelists. When compilations of classic gospel are released commercially, Gospel Memories is among the first to feature samples from these new sets. The annual Christmas Caravan of gospel artists singing Christmas carols has been a staple of the show since the first Caravan aired in 2001.

Gospel Memories can be heard on WLUW; via the station’s live webcast at www.wluw.org; and on nearly 20 terrestrial radio stations, Internet radio stations, and low power FM stations in Canada and the U.S. In 2011, the program received a Gospel Music Heritage Award from the African American Museum of Philadelphia and a Rhythm of Gospel Award in 2019.

Gospel Memories is not just spiritual entertainment. It is a history lesson and a chance to honor the gospel, spiritual, and jubilee artists, living and deceased, who paved the way for today’s stars.